How Cien años de soledad made me a better interpreter

It’s true. Last week I knew something that my coworker didn’t, and it was all because I’ve read Gabriel García Márquez’ classic Cien años de soledad (twice now). It was a real red-letter day.

As a medical interpreter, I float between all the different areas of the hospital and clinics, but I spend a lot of time in the OB/GYN clinic. The main interpreter there is a really sweet and smart girl named Anne. When we can, we like to share with each other new vocabulary we’ve come across. You know, iron sharpening iron and all that. Well, sometime last week or the week before that, we had a few minutes of downtime and she announced that she had a word for me, a word that made her draw a total blank when she had heard a patient say it. Of course, she was hoping to corcharme. I love to learn, and I love to be challenged, so I was psyched. Bring it on, Anne. I’d like to see you try to stump me! (Inside, though, I was quaking in my boots and praying that she’d go easy on me.)

So, do you know what pesarios are? Believe me, she very smugly considered this a rhetorical question. So, dammmn did it feel great to be able to whip out, como si nada, my response.

OK, so it didn’t go down exactly like that. (For one thing, we were speaking in English.) And I wasn’t anywhere near as smooth. (Nor haughty– I just like to be dramatic on the blog to spice things up.) It was a little more like this.

Pesarios? Yeah, did you ever read Cien años de soledad? (She had.) Well, don’t you remember Fernanda, who was super prudish and holier-than-thou and uptight? She would write to los médicos invisibles about some problem she had, and they sent her the pesarios, and she kept them hidden. And, something like she was supposed to put them in her vagina, but she was so prudish and mortified by everything related to her body that she didn’t even do it? 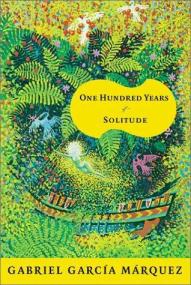 I didn’t previously know the word pessary in English (often used, as in Fernanda’s case, for a uterine prolapse), but it was easy enough to guess. Regardless, Anne was completely blown away by my literary chops. I didn’t think it was a big deal myself, but she was stunned. And when I stopped to think about it later on, I let myself be just a little impressed as well. I really should learn to be better at leaving modestia aparte when people want to tip their hat at me. If they want to be dazzled, who am I to discourage them?

I thought I just read for fun and pleasure; never did I imagine that the vocabulary would come in handy at work. (How I wish the word pesario had come up in a session and that I had been quick on my feet to interpret, images of Fernanda and Aureliano Segundo and the lot swirling through my head!) Here’s a relevant passage.

Thinking about it from a language learner’s perspective, I love how her tendency to not call things by their real name is described as a pernicious habit. And how! It is so very pernicious. You have got to expand your vocabulary and call things by their true names (and not just things, but verbs, actions, ideas). Otherwise, you’re just asking for trouble and a lifetime of mediocre Spanish. Overpowered by shame, Fernanda put her life at risk by holding off on asking what a pesario was; how do you hold yourself back by not asking about and learning the vocabulary you need? El peso de una palabra desconocida . . . It sure is a weight! A burden, a suffering. So unburden yourself already and just learn the words, remember them, and use them. Then life will feel so much lighter and your experiences in Spanish will go swimmingly. Amordazar la vergüenza . . . yes, silence your shame, gag it, muffle it. Don’t let it dictate what you will and won’t be able to do. Ask! Finally, whatever you do, don’t throw your learning materials into the toilet. They don’t even flush toilet paper down the toilet in Colombia, so just imagine the mayhem were you to follow Fernanda’s example.

Would you have known what a pesario was? Do you remember this part of Cien años de soledad? Did you ever have a similar experience where some random word from a book or movie or song somehow came to you just in the nick of time in the most unlikely of circumstances? It’s a great feeling, believe me. For a whole minute there, I got to feel very intellectual and erudite. Life was good.

This entry was posted in Body, Books, Medical and tagged Language, literature, Spanish. Bookmark the permalink.