I went to a party the other night, and we were all having a merry old time. One of the guests started playing the guitar, and someone asked if he knew any songs by Ricardo Arjona. No, not Arjona, I pleaded. ¡Es muy cursi! Judging by the immediate chorus of indignant gasps and protestations, I had touched a nerve. More than merely defensive of the singer, they took issue with my epithet of choice. ¿Y qué tiene de malo eso, ser cursi? I didn’t stop there. Es más, I said. I’ve found that Hispanics on the whole tend to be much more cursi than Americans. Well, that was it. Se armó la de Troya. The women were then up in arms. Oh, what does she know about love? She’s just a cold, heartless gringa. How could she ever understand the way we Latinos feel and express ourselves? No, they didn’t actually say those things, but it’s what their whelps were basically communicating. As we’re all friends, I took their ribbing in stride. They wouldn’t let me live it down, though–the rest of the night, they kept making a big deal about all the music being CURSI and then looking at me as if to apologize for offending my stony artistic palate.

I wanted to retirar lo dicho immediately, and not because of the outcry from my friends. I knew that no feelings had been hurt, and I still stand by what I said—Ricardo Arjona is cheesy. Immensely so. And his music is not my cup of tea. But if someone wanted to, I’m sure they could lampoon many of my beloved Hispanic singers for being cursi as well–Silvio Rodríguez, Julio Jaramillo, Chavela Vargas, etc. Why does cursi get such a bad rap? And what do we reveal about ourselves when we hiss and glare at this adjective as if it were the devil?

Cursi means cheesy, especially in the sense of mushy, sentimental, sappy, lovey-dovey. Cloyingly sweet, sickeningly sweet. Empalagoso, hostigante, acaramelado. Someone who is cursi oozes miel–honey–and is thus meloso. Think of the Seinfeld episode where he and his girlfriend called each other Schmoopy, and you’ll have a good idea of cursi.

It’s very subjective, though. I guess everyone has a certain degree to which they can tolerate mushiness. Predictably, it’s always other people’s sappiness that gets on your nerves; one almost never views their own actions as cursi unless their family and friends start giving them a hard time about their soft side. That is, we’re all hypocrites when it comes to being cheesy. All of us, of course, but the Spanish speakers.

I had a cursi friend in Bogotá named Jhon Carlos. Here’s how I described him to a friend back in 2010: “He’s kind of awkward, though awfully sweet and tender, also kind of cheesy and… eager. :)” Yes; very cheesy, this Jhon Carlos. And very eager–muy intenso–but so genuine and sincere. He filled my inbox for years with emails full of virtual flowers, cliché professions of love, and lots of melosidad. Although I rolled my eyes at the trite and sappy ways that he expressed his feelings for me, I respected him for being so heartfelt and unabashedly cheesy. O sea, for not holding back and for not apologizing for his cheesiness in an effort to put up a barrier of self-protection in case of rejection or mockery. People who dare to bare their hearts make themselves easy targets, but who wants to be the grinch who goes around ridiculing people for attempting to find and then luxuriate in love? Insecure people, that’s who.

My first boss in Colombia, Alba, once gave me a painfully cursi stuffed lion attached to a fuzzy cup that had two hearts on it and had HAPPY EVERYDAY emblazoned across the top. I was touched. The examples I could give of cursi-ness that I observed in Colombia could go on and on, and I’ve noticed it among Hispanic friends from other countries as well. And it’s one of my favorite things about them–I love my Hispanic friends and the Latin American culture at large for being so cursi. I do. No, I still prefer not to receive stuffed animals from love interests seeing as I exited childhood decades ago, but I will take a cheesy, over-the-top, melodramatic love any day over some serious, respectable, safe, buttoned-down alternative. Yawwwwn. ¡Qué pereza! 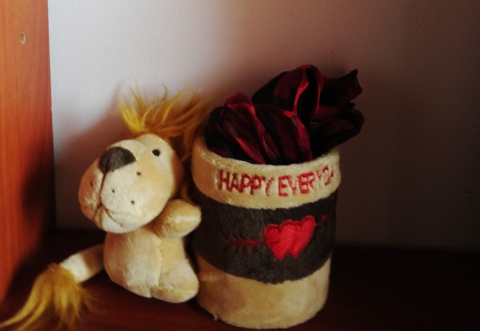 Hell, one could date Pablo Neruda and even find him cursi were they to insist on militancy against all sentimentality. Where’s the fun in that, though? And, who knows, maybe even Neruda got exhausted sometimes from the great pressure to be original and not cursi–after a long day of racking his brain for inspired, fresh symbols of love for his poems, perhaps the most he could muster up for Matilde was a little teddy bear he’d pick up at a nearby store. Maybe she even requested them, having been up to her eyeballs in sonnets and odes. There’s nothing wrong with being a little cursi from time to time, and if it’s your MO, well more power to you so long as your partner’s on the same cursi wavelength. Each set of lovers forms their own language and lexicon composed of their significant symbols and code words, and who really cares if some fulano scoffs and labels them as cursi? Ain’t nobody got time for that.

I also think of a gift I once received in Colombia of a set of pillows, one of which had my name crookedly embroidered inside a heart. You can probably guess whose name was in the other heart. As far as cursi goes, I’m pretty sure those pillows take the cake. And yet, very much out of character, I loved those pillows and not in spite of their adamant cheesiness but rather because of it. They were sincere, they were made and given with so much love, and their very existence was a brave, unironic, and unambivalent celebration of something very beautiful and worthy of praise, even if it were to later prove ephemeral. What am I, too good for cursilería? Of course not. Love is always worth celebrating, albeit imperfectly, albeit cheesily, albeit precipitately, albeit years after the fact.

In sum: What is love if not cursi? Love is supremely sentimental and gushy and ridiculous. And love means leaving your self-consciousness at the door, as well as your ego. I feel like you’re not really in love if you’re not regularly making a fool of yourself! But why hide our cheesiness within the safe confines of relationships? I admire people who can unblushingly own their feelings, hopes, and even disappointments without pussyfooting or pretending to not care all that much anyway. Although cursi people could use some work in the originality department, at least they care in the first place. There’s a lamentable epidemic of nonchalance and numbness and self-absorption these days, and cheesiness is a much better alternative to these terrible modes of subpar living. The way I see it, life is about caring. And since people have been caring for millennia, it’s awfully hard to express your care in a way that millions of other people haven’t already done. So, go ahead and be cursi. Those who would snarl and say bah humbug and rain on your parade have their own issues–just feel sorry for them. Ricardo Arjona, I still don’t like your music, but I respect you for sharing your cursi soul with us. There are certainly worse ways to be.