You might have missed it, but I made a brief mention of a pizza boy in the last post. How do you say that anyway in Spanish? I don’t want to lose the final round of Jeopardy someday because of this egregious ignorance. 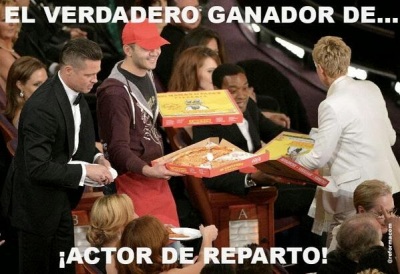 If you tuned in to watch the Oscars a few weeks ago, you saw Ellen order pizza on a whim for the stars. The pizza delivery boy was reportedly given a $1000 tip. My favorite satirical news site here in Colombia is Actualidad Panamericana (fine, the only one I know of, but so good!), and they did a local riff of this extravagant gesture soon after.

Pizza Boy Recalls 1000-Peso Tip at the TVyNovelas Awards . . . A pizza delivery boy received the astronomical sum of one thousand pesos as a tip . . . “I handed him the pizza and to my astonishment was given a thousand-peso tip. He said it was for the bus, which was very generous of him, seeing as the bus costs 1400 pesos.”

1000 Colombian pesos is like a whopping 50 cents. I’m not quite sure in which direction this satire is aimed, but in any case a 50-cent tip for a delivery boy probably would be newsworthy here.

Repartidor de pizza was also the phrase I saw used as the story about Ellen was disseminated throughout newspapers in Spanish. Repartidor? Pizza passer-outer? Because, for me at least, repartir is when you divvy something up and then everyone gets a piece. Like a slice of cake, or a share of the booty. But, lo and behold, repartir can also mean to deliver, like mail or newspapers. It sounds so sterilized, like how job titles have changed over the years to make them genderless or make them sound more official. Pizza distributor. Pizza conveyor. Pizza dispatcher. Pizza destination coordinator. Pizza courier. Pizza transfer engineer. Pizza logistics manager. What a difference a change of perspective makes!

At a stoplight, who could resist reaching in for a slice?

I was pleased to finally know how to say pizza boy/girl/man/lady/PERSON in Spanish, and then immediately crushed like red pepper flakes to be informed that no one actually says that, at least not in Colombia. Told that the phrase is always translated that way in Spanish subtitles on foreign movies, I assume that repartidor de pizza is standard somewhere. Speak up! The best alternative I could wrangle out was domiciliario, which is obviously all-encompassing for people who deliver orders, that is, domicilios. To domiciles. I’m not sure that I’ve ever noticed a delivery person on a motorcycle conveying anything pizza-shaped, but I do distinctly recall the surprise and charm I experienced when I first visited Bogotá in 2007 and saw fried chicken being delivered in little chicken coop-shaped containers atop motorcycle grills.

Repartidor de volantes, OK. A person who passes out flyers. That feels more natural for me. And here’s an old article on a repartidor de tinto.

I recently learned in my translation class that the classic movie Home Alone is known as Mi pobre angelito in Spanish. My poor little baby. In this clip in Spanish, you can watch the famous scene where Kevin has the Little Nero’s pizza boy go to the back door and then scares him half to death using clips from an old movie and sounds of a machine gun. “Keep the change, ya filthy animal” becomes Guarda el cambio, inmundo animal. Poor little pizza boy. 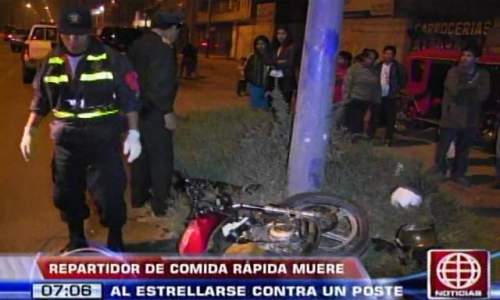 Here you can get almost anything delivered to you, and I know that I am totally desaprovechando this laziness afforded me. To my shame, I don’t have any firsthand experience with repartidores/domiciliarios save for when a friend ordered pizza the other week. That should change, though. And you, what do you call the pizza boy?