The list of so-called Colombian phrases goes on, and today’s entry is one I find particularly fun and with a fascinating backstory. Not to be read on an empty stomach!

Literal translation: Ooh, who ordered chicken?
Translation: How did we get so lucky to have this attractive person grace us with their presence?
Meaning: What a babe! Ooh, sexy! What a stud! What a hunk!

¿Quién pidió pollo? is said when a really attractive person walks into a room. Ooh, who ordered chicken? Why chicken and not chorizo? Why meat and not asparagus? Why are we comparing people to food at all? It’s kind of a long story.

So, chicken used to be a luxury food for Colombia’s middle-class city dwellers. Sure, it was frequent fare in the countryside, but its high price (due to high production costs and inefficient production methods) made it a treat for special occasions city-side. Chicken was for the well-off, and to be able to eat chicken regularly meant you had elite status. Elite families could splurge on chicken on Sundays, and non-elites had to wait until the December holidays to savor the delicacy.

As chicken was so expensive, it became common for a diner in a restaurant to jokingly screech Y eso, ¿pero quién pidió pollo? when the check arrived, indicating their faux shock at the high price, one that could only be explained by someone at the table having ordered the opulent dish. Either to identify the prodigal person and stare them down, or to ironically point out that as no one had ordered chicken, there was no justification for such a sky-high bill. But, really it was just a joke, a meaningless line to gripe about having to fork over the payment and to elicit a chuckle or two. Basically, good grief! You’ve got to be kidding me! Though maybe funny at first, the line is now considered by many to be the height of tastelessness and low-class behavior, eliciting only groans. Dude, you ate the food; just pay what you owe and don’t be stingy. No need to be a drama queen about it. Oh, and the eighties called; they want their joke back.

Sometimes the phrase is used to express that a bill for anything is expensive, not necessarily chicken. It’s when you do a double take when the bill comes, incredulously asking yourself, how can that be?

I’d just gotten to Colombia, and I ordered some patacones with chicken and cheese at a restaurant in the Santafé mall. The bill came for the totally reasonable amount of a whopping $12 USD. Excuse me? Um, who ordered chicken? OK, I ordered chicken, but it still seemed crazy expensive to me.

Times have changed, though, and chicken is now the cheapest meat in Colombia. Whereas before chicken would have been unreachable for the lowest strata, it’s now a food for the masses. To be pertinent today, the phrase would have to be: Who ordered beef? Or, who ordered pork? Not to mention who ordered lobster, Waygu beef, or caviar. The phrase lost its punch and has largely disappeared from Colombia’s lexical landscape, after its peak during the 50s and 60s. Well, with this meaning anyway. ¿Quién pidió pollo? is still alive and kicking, after being reborn in an entirely different environment. From being used to describe a luxury food, it’s now used to describe a luxury person. That is, when an attractive man or woman walks into a room, catching people off guard.

How to reconcile this new usage with the old one? This gringa‘s guess is that the “chicken” (the luxury item) has arrived, luscious and mouth-watering, and now people want to know what they did to deserve such over-the-top eye candy. Like, people walk in and out of a room or an office constantly, and they’re just rice and beans or a plate of lentils. Filling but nothing to get excited about. But, chicken? And nobody even ordered it? It just walks in to freely bestow us with such attractiveness? Yessiree, count me in. It’s a phrase of admiration. The question also seems redundant to me–it’s not really asking who does this “dish” belong to? It’s more like, um, nobody here ordered such a gourmet dish, but we’ll take her/him! I’d love to hear the perspectives of others–like I said, these are just my speculations. 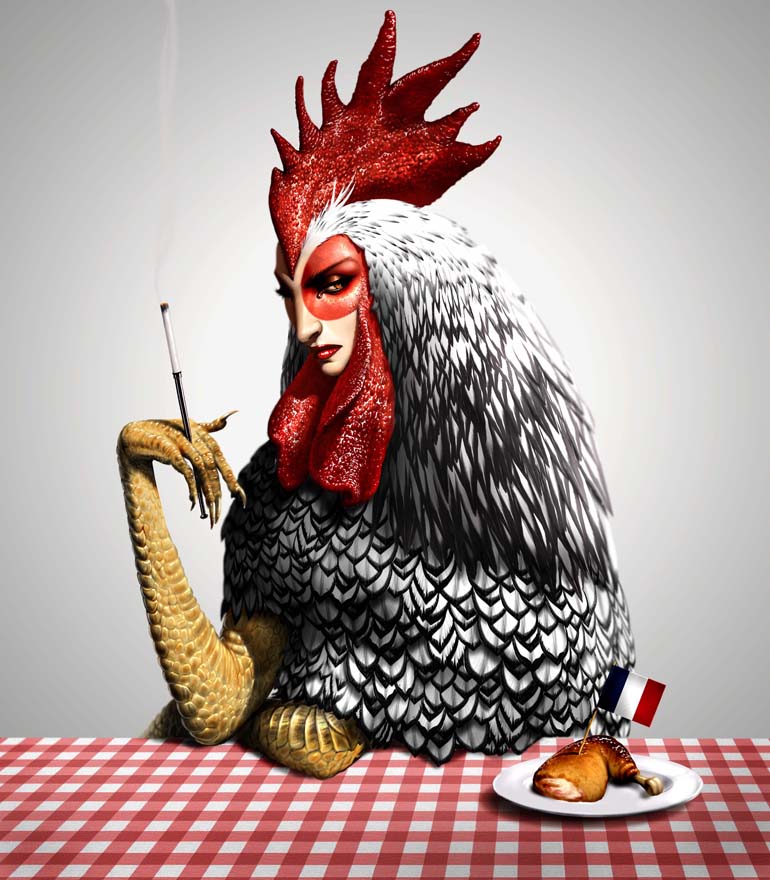 Some people think the phrase is used because an attractive woman is similar to a chicken: legs, bronzed skin, and what have you. I don’t really buy it, though. And, as noted, the phrase is also used for men.

So, you might hear this when someone (or even you, you stunner you!) attractive walks into a room, or you might just hear it used as a piropo when someone who’s a looker passes someone on the street. It’s like, would ya look at that . . ?

This was bizarrely enough one of the first Colombian phrases I learned when I arrived five years ago. Family members of the people I first stayed with put on some clips of Antonio Sanint’s classic standup comedy routine, ¿Quién pidió pollo?, going on and on about how it was the funniest thing ever, oblivious, I guess, to how iffy my Spanish was. Yeah, funniest thing ever, I’m sure, except when you only catch or understand every tenth word. So, that was a bomb, but I listened to the routine on Youtube years later while working a boring desk job. Much, much funnier that time around. I listened to the routine again last night while making dinner for, um, research. Here’s the part about the phrase, and Sanint touches on both meanings and uses of ¿Quién pidió pollo?

But the king of all the phrases, those ones that we can’t help saying, is when you’re in a restaurant and you get the check, and you look at your friends, and even though they don’t even think it’s expensive, you say, oooooh, who ordered chicken? I imagine that was funny once . . . back when chicken was expensive, I guess. But it’s not anymore, so that phrase has, it’s taken on, now we don’t even use it with food, but, oooooh, check her/him out! With a leg like that, what do I need two of them for? Just like the doctor ordered–am I right?

I’m pretty sure this phrase is as Colombian as it gets. For better or worse, you’ve just stared right into the Colombian psyche. Food, money, sex, culture: this slice of language encapsulates all of them. What else needs to be said?